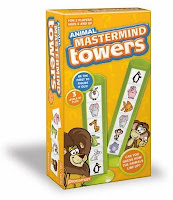 All right! We're starting the giveaways. Up first, two Mastermind® games -- the classic version and Animal Towers. To enter, just leave a comment by midnight Sunday, Oct. 3, telling me your favorite game. One winner, chosen at random, will be announced next Tuesday.

Pressman® sent review copies for me to keep and will provide the giveaway games. The review games went to two of my younger buddies, Daniel and Jacob.

And here's the review on Animal Towers from Daniel's brother Jacob -- and mom Vicki:
Mastermind Towers is a fun logic game for younger kids. It's a two player game played with plastic and cardboard tiles illustrated with cute animals. The players each pick a certain number of plastic animal tiles, and then arranges them vertically in a plastic tower. Each player gets larger cardboard tiles with the same pictures their opponent has in his or her tower, and then players take turns asking questions. The object of the game is to figure out the order, from top to bottom, of your opponents animal tiles. This game was slightly difficult for my 6-year-old, who enjoyed playing it with help, but slightly older kids really liked playing it. Here's what Jacob (age 6) had to say about the game: "The game is really fun. I like the animals. It's a good game for kids my age."

The experts have spoken: Now let's hear from you! (Hmmm. Does that sound bad? You know what I mean.) Tell me your favorite game and you could win. And, yes. You can define "game" anway you'd like ...

P.S. There is a creativity lesson here. Someone at Pressman said, "Hey, we've been selling this classic game for years. How can we expand the market?" And someone else said, "Well, maybe we could come up with a version for little kids." And, voila! A new twist on the old game.
Posted by Jan at 4:22 AM

Hmmm. According to analytics, there were lots of people visiting yesterday ... yet hardly anyone posting. If you have trouble posting, you can send me an email at jan@sokoloffharness.com with your comment. Thanks!

with my k-garten daughter, our current favorites are Candyland and Connect Four. My older kids enjoy Life and all sorts of card games.

Marbles, as we called it when we were kids. Pretty much like Sorry except we played on a wooden board my mom's godfather built. Taught it to my 5-yr-old grandson last week - a new tradition because he loved it but beat me by a roll of the dice.

It's a tie... Trivial Pursuit and Pinochle