Friday Fun: Do you see what I see?

Thanks to CJ, Leslie and Hedy for their responses to Wednesday's post! Always fun to ask creative questions and be reminded by the answers that we all see the world differently.

It's a lesson to remember. After all, our eyes don't really see. Our brains see. Our eyes just transmit the info.

With that in mind, the creative instigators my brain sees in the photo below are the same ones CJ saw -- but for slightly different reasons: 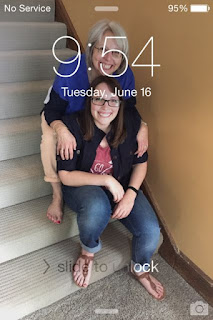 We all need a break now and then -- a real break, where we put down the day-to-day responsibilities and deadlines and pick up our toys. So here's my Jewish momma advice: No matter how hot it is where you are, take some time this summer to just chill.

Hi, CI buds! Long time no talk -- I've been on vacation. Now I'm back, with a quick quiz for you. Look at this screenshot I grabbed while on the road. Along with the two humans, there are at least two other creative instigators in this photo. Hmmm. Maybe three. Tell me: How many do you see? And what are they? 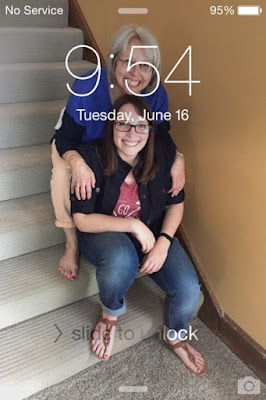 When I submitted a story idea for the 2015 Twitter Fiction Festival, it wasn't my usual well-planned, carefully edited copy. I had an idea, I didn't have time to mess with it, I sent it in.

And they liked it. My story idea was accepted and I had the joy of being part of the festival, giving me the opportunity to happily-forever-after tell people that I was listed in the same L.A. Times article as Margaret Atwood. (See me there? Fifth paragraph? I'm one of the lesser-known authors.)

Take a chance, folks. Stop over-thinking every word, every brush stroke. Stop agonizing over every creative decision. Take a chance, put it out there and see what happens!

P.S. Think the creative tools you use don't matter? Think again. Not only did I use crowd-sourcing as part of my content generation for the 2015 Twitter Fiction Festival, but I had an awful moment where the computer froze at a critical point of the story line. Terrifying. And yet another reason to love my Moleskin notebooks. They never freeze. 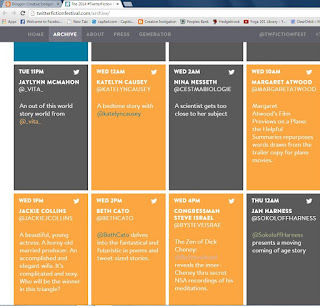