Creativity Tips: While I'm Away 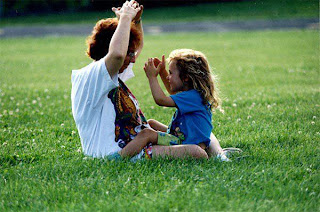 As I head off for Israel, here's what I wish for you -- Itsy Bitsy Spider moments. You find them at home, at work, out in the world. Those moments where you and one other person completely connect. Moments where you give and receive joyous, generous, undivided attention.

Hugs to all of you and thanks for being part of the CI team!

*According to a new study by Harris Interactive for TeamViewer, 52 percent of Americans expect to work while on vacation this year. I proudly remain in the minority.

So, you were saved last week from a long post re: mean people. However, without going into gruesome details, I do want to mention one thing:

If someone mentions a creative idea to you -- in a meeting, at home, wherever -- don't mock them. I don't care if the idea is silly, impractical, expensive and ridiculous. If you can't say something nice about the idea itself, try this:

That's fascinating! What made you think of that?
Or:
How interesting! I don't know if we can make that work, but maybe we can use your idea as a starting point for brainstorming ...

If nothing else, just smile and remain silent. Don't mock. Mocking kills creativity.

P.S. With that off my chest, I can now move on. And that may be the bigger creativity tip today. When something is bothering you, deal with it. Then forget about it. Life is too precious to waste time fretting about other people's mistakes.

P.P.S. Life is also too precious to waste time fretting about our own mistakes. Fix 'em. Apologize if you should. Move on.

You've heard of a beach read? Well, I'm looking for a sky read. Sunday's flight from New York to Tel Aviv is more than 10 hours long. I can download books from my Kindle to my iPad* because I'm cool like that. I also plan to take a few real, solid, tactile books and magazines -- just for old time's sake.

Any suggestions on what I should read? All ideas are appreciated, other than "50 Shades of Grey." Seriously. I bought it. I tried to read it. The writing literally makes me cringe. The writing -- not the topic. Very important distinction. Erotica can be literature. Read Anaïs Nin.

(Hmmm. Even literary erotica is probably not the appropriate read for a flight to Israel. You can see why I need some help here.)

*I think it's a lot easier to read on the iPad -- better lighting and resolution.
Posted by Jan at 4:22 AM 4 comments:

One of the joys of doing the Creative Instigation blog is connecting with people I don't know -- I love it that my friends and family read the blog, but it still amazes and delights me when strangers find the blog and like it.

That brings us to CJ, who posts comments here now and then. The Alphabet Sunday feature on her Pony Express blog prompted today's creativity exercise:

Let's start the week by firing off a few new synapses, courtesy of a few old memories. Ready? Get out a clean sheet of paper. Now ...
Fresh week. Fresh start. Here's to Monday! 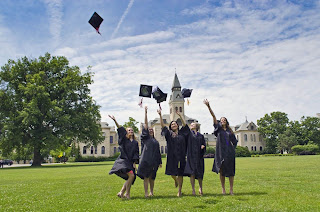 Right after the mortarboard tossing, Kate traveled with her friend Ann to Europe for a month. They're home now and Kate is looking for work. What qualifies that as a Friday Fun feature? Simple. It's fun to share her creative resume with all of you. And take a look at this fun photo!

I had an entire post written for today encouraging people to be nice, drawing on several recent not-nice experiences I've had.

Then, my friend Chris took me to lunch. And I was reminded that the world is full of kind, good, supportive people. So I don't feel like chiding anyone today. It's summertime. Go outside. Go play.

P.S. With Chris and colleagues Keith and Karen, I have a whole Armada on my side! They're brilliant. Check 'em out.
Posted by Jan at 4:22 AM 2 comments:

Creativity Exercise: Write a Note for the Western Wall

In two weeks, I plan to be in Jerusalem as part of a trip with the Jewish Women's Renaissance Project. It's an interesting time to be in Israel. Lots of unrest between Orthodox Jews and other Jews -- along with the usual geo-political issues.

This is my first trip to Israel and much of my time will be spent studying at a facility near the Western Wall. It's traditional to leave a note -- often a prayer -- in a crevice of the Wall.

That brings us to an interesting creativity exercise: If you could send a short message to a higher power, what would it be?

(You don't need to believe in a higher power to do the exercise. In some ways, it's probably a better creativity exercise for those of you who don't -- requires more imagination!)
﻿
Posted by Jan at 4:22 AM No comments:

As a Kansas City native, I feel obligated to do a post re: today's All-Star game:

One of the many activities tied to the game was Sunday's program at the Kauffman Performing Arts Center, a fond look back at the 1985 World Series.* In The Kansas City Star story about the event, the reporter quotes former Royals catcher Jim Sundberg, talking about the 1985 squad:

"This team probably wasn't our most talented team, but it was the team that played best together."

That's what I'm talking about, folks. "Plays well with others" is more than a box to check off on the kindergarten grade card. It's an approach to life, a generosity of spirit, that leads to success. It leads to championships.

When you build your All-Star creative team, consider talent the table stakes. But before you move forward, ask yourself: "If I didn't have to, would I really want to play with this person?"
---
In keeping with the All-Star trends, here's my list of what makes KC special -- beyond the BBQ, boulevards and baseball.
*I have a ticket from that series in my wedding album. Tom and I got married on Oct. 27, 1985, the day the Royals won it all. That must be a good marriage omen ...
Posted by Jan at 4:22 AM 2 comments:

Recently, Kate and I were driving to the car shop and went past a young man, zooming along the sidewalk on his bicycle.

Now, here's the fascinating thing about that exchange: I hadn't noticed he was going downhill. Consider it part of my charm; I often overlook the obvious.* Fortunately for all of us, Kate adds her insight and perspective to my continually evolving creative team.

This week's advice? Surround yourself with people who see the world differently than you do. It's a really fast way to widen your creative vantage point. And that's a huge advantage.

*Be nice. It's Monday. Let's call it a charming trait rather than a sign of impending senility.
Posted by Jan at 4:22 AM No comments:

You never know where the path of a journey -- or a conversation -- may take you.

Yesterday, out of the blue, Kate asked me if Atchison, Kan., was one of the seven gateways to hell. OK, the mention of Atchison wasn't completely out of the blue. We were discussing Amelia Earhart. However, the "gateway to hell" was a bit off topic.

While I was still laughing about that, she corrected herself: "Oh, no. It's not Atchison. It's Stull, Kan."

And that, my friends, brings us to Weird U.S., where a funky little homespun newsletter turned into a much bigger creative endeavor -- a place where you can discover why Stull is considered a direct path to hell. Read carefully, and you'll also uncover a bit of creative inspiration: The guys behind the project recognized an opportunity when it came their way and pursued it. Think that's common? Think again.When opportunity knocks, a lot of us refuse to listen.

(But avoid those gateways to hell. Especially in Stull. Hell, if I'm going down, I expect a more exotic entryway than a cemetery in Kansas ...)
Posted by Jan at 4:22 AM No comments:

Do you have time to read a short essay by Tim Kreider in The New York Times? No? Ah, then you're the person who needs to read it most.

Thanks to Bob for pointing me toward the essay and reminding me to avoid the busy trap. Happy Monday!