While cleaning out a closet, I found a box full of old notes and clippings and a few drawings. This, this, is my self-portrait at 23 years of age. 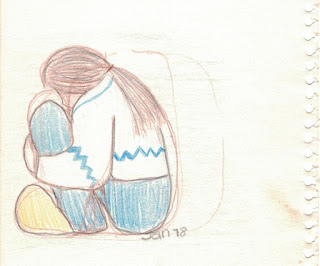 Oy. So sad. So, so sad. I know why, and I won't bore you with the details -- let's just say men were involved. Now, looking at this, I just want to reach back and tell my dear younger self, "It gets better! It really does!"

The words that come to mind when I look at this are all negative. (Well, other than the part of my brain that says, "Damn, girl. That's not a bad self portrait.") And that brings us to today's creativity exercise!

My Instagram account includes a four-word bio -- and all four words make me happy: Writer. Mother. Baker. Friend. If you had only four words to describe yourself, what would they be? This is a quick exercise: Decide on your four words in the next 60 seconds. Go!

Looking for a longer creativity exercise? Draw a self portrait. Then put it in a box somewhere, for your future self to find ... and remember.

P.S.: I'm glad I lost the despair. I wish I still had that blue-and-white sweater.

In the Path of Totality

It's not often that a cosmic event coincides with one of my published poems, but today is the day! Being in the path of totality for the eclipse reminded me of a poem I wrote years ago. I'm happy to say it was published in The Kansas City Star. The book editor back then liked it; I hope you do too.

In the path of totality
the eclipse is complete.
darkness conquers
day
For a moment.

Standing in the path we
don’t look
directly at each other.
darkness conquers
love
For a moment.

P.S. You know what I think of when I think of this poem? My friend Angela cut it out of the newspaper when it was published and framed it for me. Kindness matters. Love wins.

P.P.S. Total Eclipse of the Heart. A classic, especially for today.

P.P.P.S. For goodness sake, if you're viewing the eclipse, protect your eyes.

Email ThisBlogThis!Share to TwitterShare to FacebookShare to Pinterest
Labels: Whatever

While we're celebrating 15 years of Sokoloff Harness Communications LLC, I should point out that I did work a few years before launching my own company. OK, a few decades. There was KBEA, KXTR, KUDL, WHB, UMKC, CCG and -- last but definitely not least -- Blades & Associates.

I figured the resume should have at least one company with a full name.

One of my proudest career accomplishments is that I am still friends with people from every job. I even married one of them.

A perk of being friends with people for years and years and years is that they remember things I forget. Today's post is courtesy of Barb Pruitt, the best boss I ever had and an amazing woman and role model. Simply put, she rocks. (So does her son, Wes. Check this out.)

Anyhoo, after reading my Wednesday post, Barb reminded me of one of her favorite quotes from my mom -- a mom-ism I had forgotten. When I would come home in tears with a horrible school picture, Mom would hug me and say, with all sincerity: "You're beautiful, Janet! And you know what? If you met a magazine model on the street, they're really not that pretty. Attractive people just don't photograph well. It's a fact."

I believe her. Here's to Mom, and Barb, and all you beautiful people! Now you know what to say when the kids bring those hideous school photos home. Attractive people just don't photograph well.

Yep. Me at 12 -- one of my best school pics.
I was looking for the one the year before, with the white horn-rimmed glasses.
I apparently tossed that one. Go figure.
Posted by Jan at 4:22 AM No comments:

As we continue our 15th anniversary celebration for Sokoloff Harness Communications LLC, it's only appropriate to go back to the moment that inspired me to launch the company.

In 2002, my sweet sister Eva took me to a women's health conference in Columbia, Mo. The heart of the keynote speaker's presentation came down to one essential question: "What would you do today if you were brave?"

Words matter. Words change lives. That question changed mine. As I drove back to Kansas City, I knew what I would do. And, with support from family and friends, I did it.

Given the power of words, it's only fitting that our next Fabulous 15 list focuses on a few of my favorite quotes. Enjoy!


15 Fabulous Favorites: Quotes
Since I'm a writer, not a mathematician, I'm going to ignore the numbers -- I'll give you 16 Scintillating Sayings rather than the 15 Fabulous Favorites. Why? Because my list wouldn't be complete with this final quote, one that shapes my life and my perspective. Still. Despite everything:

"I still believe that people are really good at heart."
Anne Frank

Friday seems like the perfect time to continue our celebration! (The CI team is partying all month, in honor of the 15th anniversary of Sokoloff Harness Communications.) Today, I'm going to take one of Shanna's ideas for a "15 Fabulous Favorites" list, and share some KC sites I love. You can visit many of these places. There are a few that require a special invitation ...


As with my favorite book list, this is all subject to change tomorrow. Possibly today. I hope you have a great weekend! Go someplace special. xxoo
Posted by Jan at 4:22 AM 2 comments:

This month marks 15 years since I decided to ignore conventional wisdom (don't quit your day job), trust my dream and launch Sokoloff Harness Communications LLC. I am tremendously grateful to everyone who has helped me along the way, and those who have given me the honor of helping them! My big advice after 15 years?

Throughout August, in honor of the fabulous 15, I'm going to post lists of 15 favorites. I decided, naturally enough, to start with books -- and quickly realized there's no way I could choose 15 favorite books. So, here's today's list of the 15 favorites on my bookshelves. Read fast. It could change tomorrow ...


I have purposefully not included books written by people I know and/or love and/or am connected to via social media -- like Shanna and Mark and Steve and Cotton and Brian and Bob and Stephanie and Walt and Phil and Donna and Peternelle, because that would have taken up most of the list!

If you have any ideas (or requests) for future lists of 15 Fabulous Favorites, let me know!
Posted by Jan at 4:22 AM 1 comment:

As it turns out, there's a limit to how much political insanity I can deal with during a day. By evening, I've usually had my fill of it all -- so I'm spending less time online. Bright spot! That gives me more time to read.

The last two books I've read are shelter in the storm; beautifully written tales that make me eager to read the next works from both authors.

In The Beast is an Animal, Peternelle van Arsdale transports you to a world unlike any you've ever encountered, and makes it feel like home. You know this place, even though it's populated with magical creatures, evil and wonderful. Yes, it's a young adult novel about soul eaters. Don't let that stop you from buying it -- much of today's best writing is classified as young adult, and the best fantasy reflects reality.

Peternelle also publishes a great newsletter; you can sign up for it here. As she says, "C'mon. Give it a try. Life is too short to live with regrets."

I have one regret about the next book I'm recommending -- I regret that I waited so long to read it.

Everything I Never Told You by Celeste Ng made all the top lists when it was published -- I bought it for my daughter Mary some time ago, and recently "borrowed" it from her. She's not getting it back. This one goes on my favorites bookshelf.

It's the story of a Chinese American family dealing with the death of a child and it should come with a warning: Don't read the last few chapters while on a plane. Not that I cried -- a lot -- while sitting next to a complete stranger or anything. (We're not talking sniffles. We're talking tears rolling down my face.)

The next book from Celeste -- Little Fires Everywhere -- is due out next month, Sept. 12. I will be reading it ASAP. Maybe I'll let Mary borrow it. Hmmm. No. Probably not.

Celeste also has a cool story online from the 2015 Twitter Fiction Festival. (She was an invited author the year I was in the festival as a contest winner. And I was pretty dang excited to be in her company, even loosely and virtually.)

Interestingly, both The Beast is an Animal and Everything I Never Told You explore some of the same topics -- family, loss, the challenge of being an outsider, the power of love to both hurt and heal.

Gorgeously conceived, written and edited books have always been an oasis for me. Given the days we live in, these two books are absolute gifts, instant transport to another time and place. Take a break. Read the books.