Supporting the Tree of Life

In my volunteer job at a local Neonatal Intensive Care Unit (NICU), I rock babies. I rock babies of all colors and nationalities. Black babies, brown babies, white babies, yellow babies -- and every beautiful blend you can imagine.

To my knowledge, these infants don't care that I'm a white Jewish woman. They snuggle in because they sense safety in my arms. They know I will hold them close, rock them gently, and sing quietly off-key.

It's lovely. It's my weekly contribution to a Tree of Life that grows with a glorious variety of branches.

And yet. And yet. One of the grandfathers of one of the preemies I rock could want me dead.

One of the grandfathers of one of the preemies I rock could want me dead. Without knowing me, without a grasp of my politics, without understanding my religion.

According to today's news reports, one of the victims of the Tree of Life Synagogue murders -- 97-year-old Rose Mallinger -- was a Holocaust survivor.

A 97-year-old woman who survived Hitler was killed by an American simply because she was Jewish. She was murdered by an American fed on a constant stream of anti-Semitic, anti-Other rants that continually gain momentum in today's virulent, violent political environment.

You still with me?

We are better than this. We are good, caring people. We are Americans. This is not representative of who or what we are.

What reminds me to believe we can do better? Let me share part of a note I received on the day of the shooting from my dear friend Deb A.:
"I just had to reach out to you to let you know that my heart is broken over the events of today. These are such troubled and sometimes hopeless feeling times right now. It seems like every day brings some new horror to face. We have to get through them, we will get through them. Please try not to be discouraged. For every madman, there are so many more good people who want to do the right thing."

Every week, at the NICU, I say a silent prayer for the babies I rock. It's not something I plan to do, it just comes automatically -- possibly because the Jewish prayers I grew up with often involved standing and rocking, a kind of rhythmic full-body prayer. So, as I rock, I pray to the G-d I know, the G-d of the Jews.

But it could be any higher being. I just want as many positive vibes in the universe as possible for that teeny person.

I recently chatted with a Muslim mother about her daughter, born far too early, but doing well. The baby was born on the 18th of the month, so I told her that was a good sign in Judaism -- 18 stands for chai, life. And this exhausted, worried mother took a deep breath, smiled and said, "Thank you for telling me. All our traditions must be respected."

If you respect me and my traditions, if you're one of the good people who want to do the right thing, then I have a favor to ask. Do the right thing. Reach out to a Jewish neighbor or colleague. Donate to a group that fights hatred. And, for G-d's sake, vote. 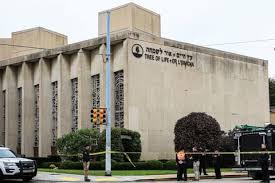 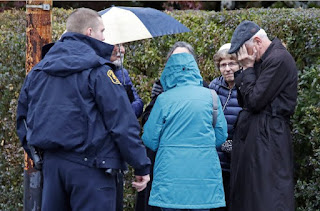