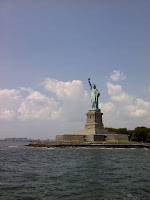 I have clicked my ruby slippers and am delighted to be back home in Kansas.

I'm also delighted that our last drive in New York was with Mahmood, an immigrant from Pakistan. More than 30 years ago, Mahmood was working on a ship that docked in the New York harbor. He waited until dark, jumped overboard, and swam to shore.*

I know this, because I asked him how long he had been in America -- he had mentioned being an immigrant and I thought it was a fairly innocuous question. Here's the gist of the conversation that followed:

Mahmood worked for many years before receiving his green card under the Immigration Reform Act of 1986. He loves America. He loves New York City. And he's an unofficial ambassador for both:

Mahmood is right. There are millions of us. And it was a pleasure to meet so many of them in New York.

Now, it's very, very good to be back. The Pakistani immigrant in New York and the second-generation American in Olathe agree: There's no place like home.

* This is not a political post re: illegal immigration. I'm just sharing a story that reminded me how lucky we are -- and how much liberty means to people who don't take freedom for granted.

P.S. I took the photo during the ferry ride Eva, Kate and I took on Sunday. It really is an amazing sight.
Posted by Jan at 4:22 AM

Email ThisBlogThis!Share to TwitterShare to FacebookShare to Pinterest
Labels: Random

Very cool story! And I'm glad you're safely home with stories to share...

I should also say: If any reader wants to consider this a political post, feel free. I think everyone knows I'm liberal. I simply don't want to get into political arguments on the blog. Not the purpose, not the point.

I tear up just looking at your photo because it's so similar to the one I took from the ferry last year. Takes me right back to that feeling.

With your gift for gab I bet you have a blog-full of stories. Mahmood's was a great place to start.

Beautiful story. Thank you for sharing. I, for one, sometimes need to be reminded about the millions. I am afraid I tend to see only the four.

Wonderful story; thanks for sharing it. I am glad that you and the girls had a great time, and that you are home safely