Grief is sneaky. It's startling. It sidles up and grabs you, unawares.

Grief hit this morning, when I was sitting at the dining room table, having my morning coffee and reading the comics online. I got to Zen Pencils, alphabetically last on my organized list*, and was slammed by the end panel: 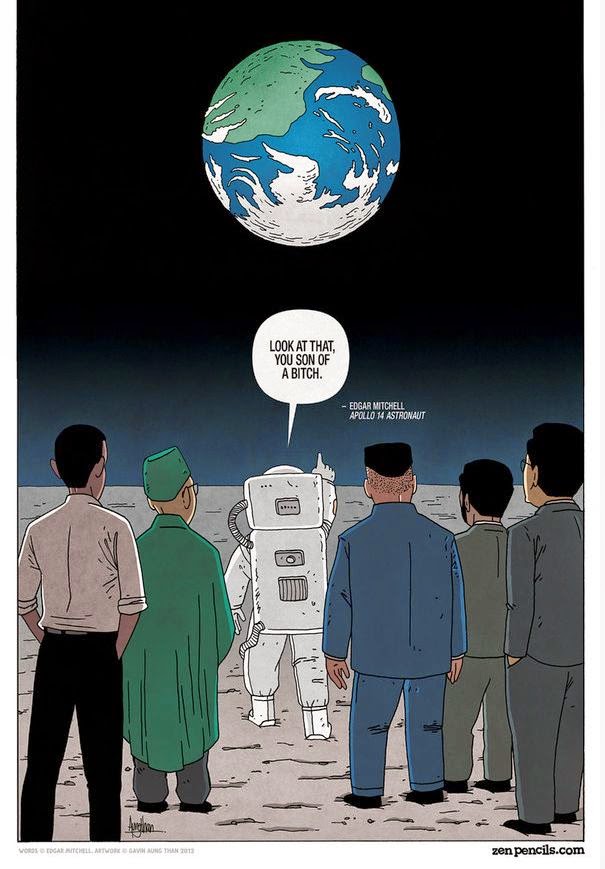 "Look at that, you son of a bitch."
-- Astronaut Edgar Mitchell, to the world's political leaders

Maybe it was the quote. Maybe it was reading the quote while drinking my coffee. But I was instantly transported to a chair in the corner of Mrs. Dougherty's apartment in Florida.

Joyce Dougherty was (and it still feels wrong to use the past tense when talking about her) my bestfriendinthewholeworldsincefourthgrade Lynn's mom. At some point in our decades together, I started calling her Mom, but I typically called her Mrs. Dougherty and that's still how I think of her.

Lynn and her hubby Paul had a mother-in-law suite in their house for Mrs. Dougherty. When I'd go visit, I typically got up before Lynn and would go over to have coffee with Mrs. Dougherty.

And, when her opinion was negative -- let's say we were discussing politicians -- one of her favorite phrases was, sons of bitches.

I can still hear her saying it. Isn't it funny how you can hear people long after they're gone, if you think of the right phrase? I can hear my dad tell mom dinner was fine. "How was dinner, Allen?" "It was fine." Took me years to realize that he meant exactly that -- always sounded sort of negative to me at the time.

Dad meant it was fine. Mrs. Dougherty meant they were sons of bitches.

And she was always right. They were.

Mrs. Dougherty was a mother, grandmother, friend, artist, cook. She was incredibly well read. She was amazingly talented. Her eyes sparkled. She had style -- she could wear a cape and a beret and make it work. That's no easy feat.

Mrs. Dougherty missed nothing. She lived and loved wholeheartedly. She was equally at ease with old people and young children. She was the contradiction we all are: painfully direct one moment, kind and giving the next. I always felt that part of the gift of being Lynn's best friend was being included in Mrs. Dougherty's circle of love.

Mrs. Dougherty was a tiny woman physically -- shorter than I was by the end, if you can imagine that. Much thinner. But she gave meaning to Shakespeare's phrase, "Though she be but little, she is fierce."

Grief is fierce. Loss is fierce. They are emotional sons of bitches. This morning's sneak attack reminded me of how even a quick memory of someone we love can bring unexpected tears and a palpable ache.

And isn't that wonderful?

The people we love stay with us, forever. They are part of who we are, who we will be. I am who I am because of Mrs. Dougherty and Dad and so many others. Loved, but never lost.

*Yes. That's right. I have to tear apart my entire office to find tax receipts, but my comic strips are alphabetized. We all have priorities.

Sidenote for those of you just joining the fun: Post 60 is a digression on the Creative Instigation blog, part of my 60th year celebration. This is post 9 of the 60. Party on!
Posted by Jan at 4:22 AM