Creativity Tips: Make it a Whale of a Tale

If you're going to do something creative, don't hold back. Shake your tail feathers and go for the gusto.

December 9 marks 100 years since the birth of Issur Danielovich, better known as Kirk Douglas. He is one of the few people I've ever written a fan letter to -- I wanted to thank him for his performance in 20,000 Leagues Under the Sea.

Specifically, I thanked him for shaking his tail feathers as he sang "A Whale of a Tale." That little wiggle kept me going on days when the girls were little and wanted to watch Disney Sing-A-Long videos. Over and over again. Some of those songs got a bit tiresome after the first two dozen plays.

But watching Kirk Douglas? That never gets old. I mean, seriously: That's one fine-looking man. And one very cute tush. 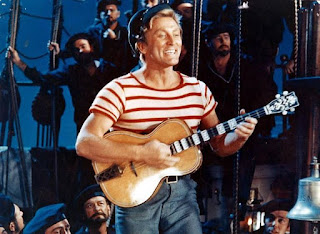 P.S. No, he didn't respond. Maybe I shouldn't have been quite so specific in my praise.
Posted by Jan at 4:22 AM

About five years ago I sent my only fan letter to Harper Lee. I didn't get a reply either, but there's value in just expressing your admiration (whether it is acknowledged or not)! Teri

I agree, Teri! And I like to assume that the people who receive the admiration enjoy/appreciate it, whether or not we hear back from them.