All the lovely tributes about Archbishop Desmond Tutu, the Nobel Peace Prize winner who died today at the age of 90, are missing one key point: Desmond Tutu glowed.

A joyful activist for equality and justice, Archbishop Tutu radiated; he filled the space around him with an expansive, inclusive, golden aura of light and love and peace and kindness.

I’ve never seen anything like it, before or since.

I was captured by the glow when Archbishop Tutu and his gracious wife Leah visited Kansas City in 1996. As one of their hosts during a visit to the University of Missouri-Kansas City, I had the privilege of driving them around town. They eschewed a limo or police escort; after years of leading protests against apartheid in South Africa, the Archbishop reportedly preferred to avoid police cars.

I was embarrassed to open the doors to my small, old car. I shouldn't have worried. They were clearly delighted to get in the backseat together and relax a bit, out of the spotlight.

As l drove this loving couple to the airport, we chatted like old friends. I asked him about the risks he faced daily, the dangers he put himself in as he fought for change. I don’t remember his response (I believe it was essentially a shrug and a, “One does what one can,” kind of answer), but I do remember Leah, resplendent in colorful South African garb, looking directly in my rearview mirror and rolling her eyes.

I could have asked dozens of questions as I drove, but Archbishop Tutu had other ideas. He wanted to ask the questions; he wanted to use our limited time together to learn about me and my life.

“You are a young woman with a career and a family,” he said. “How do you manage? How do you balance all the demands?”

He asked. He listened. This gentle, strong, world-changing leader wanted to know about me.

I was honored by his interest; he was grateful for my time. Several days after their visit to Kansas City, I received a handwritten postcard from the Archbishop, thanking me for all I had done to “look after” him and his wife and letting me know they enjoyed themselves “hugely.”

Archbishop Desmond Tutu was all of the things the tributes note — he was ebullient and inspirational. He was heroic, powerful, and courageous. He was a sage and a leader.

In the words of my religious tradition, may his memory be a blessing. May his light always shine. 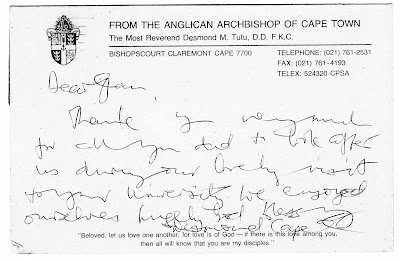