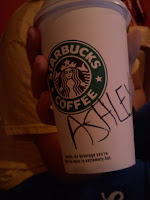 I know. I know. It's only September and I'm talking about Halloween. I could blame it on the retail rush of the seasons, but ... that's not it.

I'm blaming it on Mary, my youngest. Thanks to her, you get an early tip for Halloween planning.

Mary recently went to a costume party with a celebrity theme. She initially planned to buy a bunch of baby dolls, attach them to her shirt, pen on some tattoos and go as Angelina Jolie. I liked that idea, but questioned how expensive the dolls would be. (There you have it, practical mom, squelching creativity.)

For some reason -- and it wasn't practicality -- she and her buddy Erin decided to go as Ashley and Mary Kate Olsen. Now, if you get People magazine, you know they're holding a cup from Starbucks in almost every photo. So, the girls went to Starbucks, asked for empty cups, fixed their hair and went.

Pay attention to details. They really do prop up creative ideas!
Posted by Jan at 4:22 AM

Jan, moms don't squelch creativity with our frugalness. We inspire more creativity, to use what's readily available in fabulous ways! And if the grocery stores can have Halloween candy out in August, then I think you're okay to start talking about Halloween in late September.

Love the baby doll costume idea. Much koodos to Mary for coming up with that. Can I borrow it, creativity squelcher?