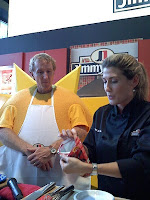 The Big Bunny commented on Tuesday that I probably have "lusty tales of high adventure" from BlogHer '10. I do, but I will save those for one-on-one discussions. (Yes, despite all evidence to the contrary, I can be discreet.) However, now that I've had a chance to let the overwhelming experience that is BlogHer percolate, I do want to share a few lessons learned:


Seriously, my big BlogHer takeaway came during a two-minute conversation in the hall: It still pays to follow your passion. Catherine, the chef in the Jimmy Dean booth, stopped practicing law to start cooking.

Catherine sparkled. Even when she wasn't standing by the sun.

And that, my friends, is the recipe for creative happiness: Find your passion. And have the courage to follow it.

P.S. I think I'm done with the BlogHer posts. We're back to whatever "normal" is tomorrow. Thanks for listening!

Mmm...sausage...oh,wait, that wasn't the point, was it!? Seriously, I love the BlogHer stories, especially since I didn't get to go this time. Sounds like a great people-watching place to be.

I think you hit the nail on the head. Follow your passion is something I took away from BlogHer. Now I just have to find out what mine is.

I really enjoyed your session. The three of you provided lots of inspiration.

No! Please don't say the BlogHer stories are done! I want more and I'm sure you can sprinkle a few more lessons and musings into your posts.

I'm sure it was fun to get your photo taken with Bruce Jenner but I have to say the Jimmy Dean Sun Guy is pretty awesome too.