Food is Love: Be a Cooking Rebel! 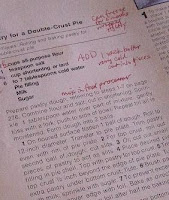 I don't cry over spilled milk, but I can throw a pretty good temper tantrum over a crumbled cupcake. Here's the deal: I recently tried a new recipe. I stuck to the recipe. The recipe stuck to the pan. Guest blogger Angela Pritchett -- the mad baker -- reminds us that rules, and recipes, are meant to be creatively broken:

As I search through cookbooks for recipes, I often come across notes written on pages and items or instructions that have been crossed out. Changing recipes may not be easy for all cooks but you can't let the recipe be the boss. My tip for CI readers is to be cooking rebels!

If a recipe calls for white sugar but you only have brown, use the brown. Your cake or cookies will have a richer taste. Do you think you really have to devote two hours for homemade cinnamon rolls? No! Eliminate the last rising and have scratch rolls from your oven in less than an hour. Trust me, anyone eating a warm cinnamon roll will not even think to ask, "How long did this rise before you baked it?"

Don't sweat the occasional flops and disasters. When the Creative Instigator had her recent crumbling cupcake experience, she hated to waste the chocolate. But her hubby and daughter gladly scooped up cake crumbs and said they didn't care what it looked like because it tasted so good.

If your cooking experiment produces a not-so-pretty dish, make notes and try something different next time. Rebels always have another inspiration to try!
-- Angela Pritchett, February 19, 2010
P.S. from Jan: Angela inspired me. I tried the cinnamon roll recipe. Mmmmmm. Seriously good.

Email ThisBlogThis!Share to TwitterShare to FacebookShare to Pinterest
Labels: Food is Love

I think I need to try those cinnamon rolls...maybe for Monday?

Since "Monday" means I'd get to enjoy them again, that would be great!

I am gonna bare these tips in mind!
Oh your post made me feel hungry Jan :)
Hugs

I hope we're all swooning in a cinnamon fog this weekend. Thanks for the support Jan and CI readers!