Have you ever made a mistake? Congrats! You're a human being.

Unfortunately, human beings in my field get publicly called on the carpet when our mistakes show up in print. For example, Vanity Fair delighted in pointing out the editing error in a recent Time Inc. ad for Motto. 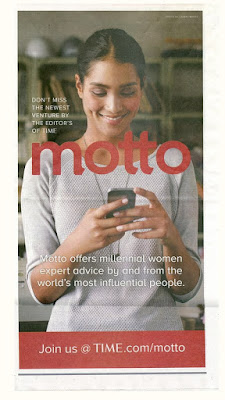 Yeah, yeah. We all see it. There's an apostrophe in the subhead: "editor's" shouldn't be possessive. Damn. An ad with a typo. Did the world end? Did anyone die? I hope not.

Along those same lines, I doubt that anyone at Vanity Fair will roll over dead when I point out, without glee, that there's a different kind of typo in their snarky story:

In addition to Motto, the company has been experimenting with other new ventures, such as a collaboration with Kobe Bryant, entitled “Dear Basketball,” to be distributed on Sports Illustrated digital properties.

As I understand the rules of the road*, the collaboration isn't entitled to anything. It's titled. And yet the world rolls on.

I'm highlighting the Vanity Fair error to make a point -- not point a finger. We all make mistakes. The question is: Do we learn from them?

P.S. Thanks to Vanessa for this and a zillion other blog ideas!

*Writing about typos makes a writer twitch. I did double-check this rule in the AP Stylebook, in case you wondered. And I proofread this post about a million times and I'm still terrified you're going to find a typo.

Amen, sister. It (proofreading) never seems to be enough. I'm one of those people that can find the three typos in any published work and not catch the five in my own, even after a couple of dozen edits. I recently ordered new checks so they would have my new address. I spelled the name of my bank wrong. (The routing number is correct, so I'll probably leave it. But at the rate I use checks... I don't know how long I can handle looking at that. ... Sigh.)

We've all been there! I used to work on a magazine. Others were excited when we finally got the printed piece back; I dreaded it. I knew that the moment I opened it up, I'd see the typos I had missed in weeks of work.