It was 1982, and I was news director of KUDL and hosted The City Report talk show. As you might imagine, it wasn't often that a reporter in Kansas City had the opportunity to talk with a man who'd been Moses, Marc Antony and Michelangelo. I wasn't a huge Charlton Heston fan, but I liked Planet of the Apes. And who doesn't love Soylent Green?

Besides, I had time to fill, and talking with movie stars was a far more attractive option than another interview with the mayor of Kansas City, Kan. He had the unfortunate tendency to wander around the studio WHILE I was interviewing him, so he could get a closer look at the Playboy bunny posters decorating the walls.

The posters never changed and neither did he. But, I digress.

Back to my buddies Kim and Charlton. You might wonder why they were in Kansas City. Good question, simple answer. They were opening a movie so ridiculously bad that they chose KC for the premiere. You know, as far from the critics on the coasts as possible.

Heston was the star of Mother Lode and he played two characters. Twin brothers, I believe. One, a crazed Scottish miner.

About 20 minutes into our interview, I was feeling pretty good. Sure, Heston was world famous and Basinger was the most beautiful person I had ever seen, but I was the one in charge and the interview was going well. So, I veered from my planned discussion.

Jan, the Cocky, Foolish Reporter:
"So, in the movie you play a crazy Scottish miner. You must have an accent. Let's hear it."

Charlton, the Oscar-Winning Actor, instantaneously in full character, with full accent, leaned forward -- an inch away from my face -- and said:
"One more ignorant question and you be sorry. Ver' sorry. Ver' dead. Am I clear, girl?"

I jumped out of my chair and screamed. Probably sounded like one of the lesser characters in Planet of the Apes. But holy Moses! Charlton Heston had turned into the murderous miner McGee in two seconds. It was like a completely different person in the seat. And then he sat back, turned into Charlton Heston again and laughed.

Kim Basinger laughed too, and said, "Welcome to my world. I've been dealing with that for months."

I can't tell you how the rest of the interview went, because I was too frazzled. I can tell you that I was far more respectful that evening, when we attended the movie premiere -- even after we saw the movie and being nice was more of a challenge.

Kim Basinger, by the by, went on to be an Oscar winner too. When she received the Academy Award in 1998 as Best Actress in a Supporting Role, I was one of 80 gazillion people watching the telecast. She went onstage, grabbed the Oscar, held it high and said: "I'd like to thank everyone I've ever met!"

And I jumped off the couch and yelled, "That's ME!"

Creative talent is a gift that requires years of hard work to hone. Along the way, as you refine your skills -- acting, writing, nursing, fathering, whatever -- you'll meet a lot of people. Some of them will leave a mark so clear, you'll know their impact on your life. With others, maybe not.

So we might as well go with the Basinger theory. When something wonderful happens, grab it with gusto, and be thankful.

And the next time you watch The Ten Commandments, rest assured that if anyone could part those waters, Charlton Heston could. 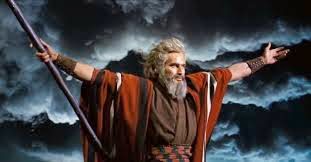 P.S. I didn't use a photo of Kim Basinger, because photos don't do her justice. The screen doesn't do her justice. It was years ago, but when I met her, she was truly astonishingly, perfectly beautiful. And smart. And funny. And, after it was all over, I realized how kind it was of Charlton Heston to insist that interviews with him included the unknown actress. Just another example of how every little step can make a difference.

Sidenote for those of you just joining the fun: Post 60 is a digression on the Creative Instigation blog, part of my 60th year celebration. This is Post 5 of the 60. Party on!

Maybe a little off-topic, but I think Clint Eastwood would make a better Moses, although I can't see Charlton Heston as Dirty Harry.